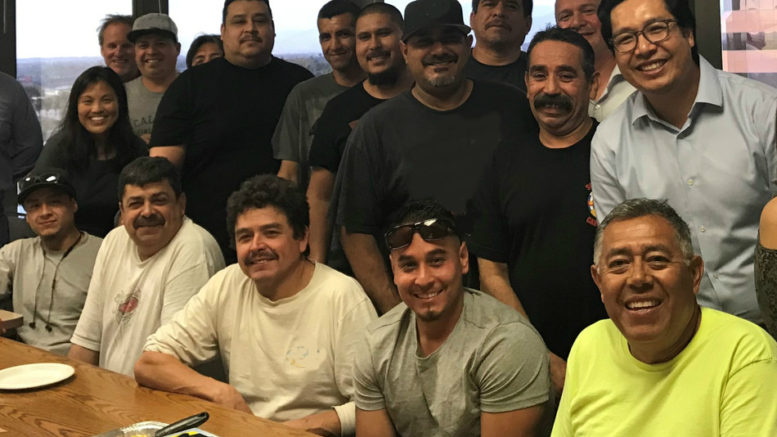 Labor Commissioner Julie Su, her staff and David Kersh of CCCC hand out checks to some of the workers owed wages (PRNewsfoto/Dept. of Industrial Relations)

ConDig (10-Jul-18).  California-based contractor TB Penick & Sons, Inc. has been forced to pay out more than $1.1 million after it was found jointly liable for wage theft by a subcontractor.

California labor Commissioner Julie A. Su said that TB Penick had entered into a settlement agreement after an investigation revealed that Newport Beach subcontractor Champion Construction, Inc. maintained false payroll records over a six-month period to cover up wage theft affecting 103 workers who were not paid prevailing wage and fringe benefits.

“This case clearly demonstrates that general contractors who select contractors that don’t play by the rules will pay a heavy price. Under the law, they are responsible for the wage theft of their subcontractors.”

Champion was a drywall and framing contractor hired by TB Penick for the Browning High School construction project in Long Beach.

The Labor Commissioner’s Office opened its investigation after receiving a report of public works violations from the Carpenters Contractors Cooperation Committee (CCCC) in March 2016.

The investigation included interviews with over thirty workers, site visits and an audit of pay records for the dozens of workers involved in the project.

The investigation led to civil wage and penalty assessments of $1,735,784. Penick entered into a settlement agreement to pay $1,187,078 of the penalties and wages owed.

In 2014, Labor Commissioner Su launched the Wage Theft is a Crime multilingual public awareness campaign. The campaign defines wage theft and informs workers of their rights and the resources available to them to recover unpaid wages or report other labor law violations.

Be the first to comment on "California contractor forced to pay out $1.1M following subbie wage theft"