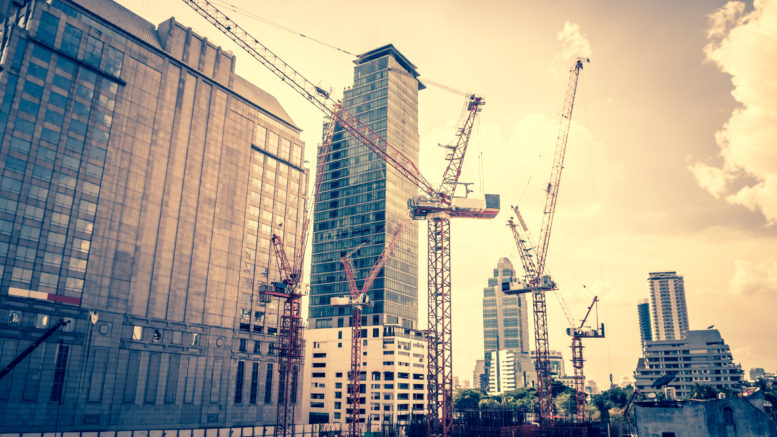 ConDig (23-Apr-18).  Construction starts in the US shot up 11% in March from the month prior to a seasonally adjusted annual rate of $785.2 billion as a pick up in public works offset a slight easing in nonresidential and residential building activity.

The rise in starts comes amid modest declines in January and February, which were down 2% and 3% respectively, and raises the pace of total construction starts to the highest level over the past six months.

It comes as the nonbuilding construction sector, comprised of public works and electric utilities/gas plants, surged 73% in March, underpinned by the start of several very large projects. These included the $3.5 billion Mountain Valley Pipeline expansion in West Virginia and Virginia, the $1.1 billion I-405 highway project in Orange County CA, the $855 million Grand Parkway highway project in Houston Texas, and a $400 million wind farm in Kansas.

Despite the rise in starts, both nonresidential and residential building dipped slightly in March, with declines of 1% and 2% respectively.

During the first three months of this year, total construction starts on an unadjusted basis were $167.3 billion, down 7% from last year, which included exceptionally strong amounts for airport terminals and natural gas pipelines.

“The construction start statistics can show wide swings month-to-month, and March certainly qualifies as one of the stronger months due to the inclusion of several very large projects,” stated Robert A. Murray, chief economist for Dodge Data & Analytics.

He added that the first quarter continued to show a seesawing pattern that has been witnessed over the past year and signifies that the construction industry is at a mature stage of expansion, characterized by a slower rate of growth.

“A decelerating expansion does not necessarily mean that decline will closely follow, and there are several factors during 2018 that will help construction to stay close to recent levels. In March, Congress reached agreement on fiscal 2018 federal appropriations, which provide additional funding for several public works programs, especially those that are transportation-related. Greater funding continues to be present from construction bond measures passed by state and local governments in recent years,” he said.

Murray also noted that the overall economy continues to proceed at a healthy pace, which supports healthy market fundamentals for commercial building.